Nearly thirty years ago, nearly half my lifetime ago, my father died of lymphoma. I was twenty-nine years old and dumb as a post, emotionally, at least.

But I thought I was all grown up. I was about to graduate engineering school and go to work in the corporate world. I didn’t know just how dumb I was. I wasn’t yet mature enough to know, to realize how people can influence our views with a word here, a word there. How people can instill their own hate and anger, their own bitterness into us just by repeating their catalogue of fear, day after day. I was raised to believe my father was a sorry, good-for-nothing man. And for a long time, I accepted it as truth. But as I grew older, I started to doubt it. Even before he died, I started to doubt it, but I wasn’t strong enough to act on it back then. Now I know. I finally recognized the truth for what it was. I was conned.

I allowed myself to be conned.

My father was a gentle person, an uneducated farmer kind of guy. But he was smart. I got my math genes from him. He was also wise enough to know that hard work means everything. That being generous and kind is far more important than being smart or right. He loved animals. And he loved me and my brother. More than I realized, until it was too late.

Some of my fondest memories are of treehouses and fishing, of following behind him as he rounded up the cows for milking, of walks through the woods looking for Christmas trees. Of him showing me just how beautiful bell peppers get when they ripen to red and purple.

I’m sorry I was so stupid.

Don’t waste the time you have. Trust your instinct about people. And talk to your father… your mother, your brother or sister. Whoever. Take pictures. Record their stories.

Maybe you’ll look back and think it was a total waste of time. But I bet you won’t.

Do it. While you still have time. 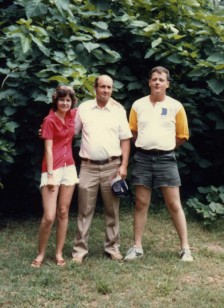 Sigh, it never ends. Or should I say, it’s started all over again.

But all this drama is good fodder for writing. I’m sure I can use this in one of my novels. And in my blogs.

And I’ve learned a valuable lesson, that sometimes the shitty things that happened to us in the past really are for the good. Back then, I was too in love to see just how big a narcissist he is. That it was all about him. But I learned. Oh, yes, I learned a hard lesson.

So you guessed it. I received another middle-of-the-night email, from the guy who dumped me like trash, who told my friends that he never cared about me, never loved me, the guy who made me feel like crap for a very long time. The guy who, in the end, automatically sent my email to the deleted folder and sent my phone calls straight to disconnect. I received an email, from that guy, whining about how I was hurting him just because I suggested he go fuck himself. Actually I wasn’t that mean or that blunt in my reply. But I was direct. I explained how he had hurt me and that I wasn’t particularly happy to hear from him after nine years of silence, nine years of him pretending I didn’t exist, that we didn’t exist. And that I hated him for hurting me, again.

He said, and I quote, “If you wanted to sucker punch me in the gut and watch me writhe on the floor, you succeeded. I had no idea you harbored that level of ill feeling and hatred for me over all these years. My memories hold something far different.”

I’m sure his memories are different. He’s a narcissist. And if he didn’t know I was angry and hurt, if he didn’t know that he nearly destroyed me, then he apparently wasn’t paying attention to anyone but himself. I’m not a particularly forgiving person, not then and not now. And I’m certainly not going to forgive or forget someone treating me like that. Not going pretend he wasn’t a dick all those months he jerked me around. Not going to pretend it was okay for him to act like I meant nothing to him in front of everyone and then turn around and send me emails in the middle of the night saying how much he missed me.

And I’m not going to welcome him back with open arms just because he misses me after nine years.

But as I said, even though I feel really stupid for ever caring about this guy, for still harboring enough love for his emails to screw me up all over again, this gives me tons of writing material. Although, if I were to use his personality, verbatim, no one would believe it, because it seems improbable that someone could be that self-involved. So, sadly, if I use him in a story, I guess I’ll have to give him a couple of redeeming qualities.

I was visited by a ghost today.

Late at night, in that mutable time between lights out and succumbing to sleep, he haunts me, still. He whispers of the things that could have been, and I remind him of all the things that were and were not, of all the small cruelties we inflicted on each other.

But today, after all these years, his voice whispered words across the page. No one else. There’s been no one else.

How I hate him for the things he did to me, throwing me away like foul-smelling trash. Denying my existence. So for him to reach out after the years of silence, for him to assume that I would be overjoyed by his missive, that has thrown me into a vortex of what-ifs. Has pushed me back into that frozen wasteland of unrequited love. And anger.

How I love him, still, for so many reasons. That’s what my heart says. But my head says that I must be strong, must take the good and leave everything else behind. To recognize that if it were not for the things he did, I wouldn’t have found the way to love me first.

His actions drove me to write, and I did.

Writing became my escape, my salvation. I allowed him to push me into such a dark place that I thought I wouldn’t survive. Only by submersing myself into someone else, only by writing their words and their sorrows was I able to fight my own sadness and climb out of that hole.

Now writing is my life, my joy. I do it for me, because I want to, because I love it. And me.

For that I am thankful, still.