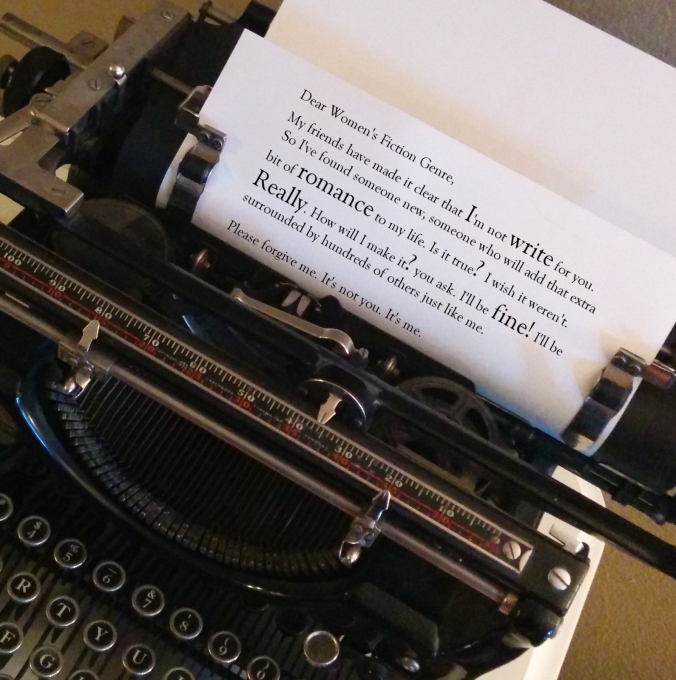 I’m having an identity crisis.

I’ve been reading My Temporary Life by Martin Crosbie. On Amazon, I was surprised to see that it’s listed as a romantic suspense novel. If I twist my brain around enough, I can see that it could potentially be a romance, but from what I’ve read, I’d place Mr. Crosbie’s book in the mainstream/literary fiction genre, not romance. So far, it reads more like a well-written coming-of-age story.

But back to me. After thinking about it for a good while, I pinged some of my friends, ones who’ve read An Untold Want, and asked if it should be classified as a romance. Every one of them came back with a yes.

So now I’m having an identity crisis. [If you didn’t notice the large text / question marks in the photo, it reads I write romance? Really?] I don’t read romance novels. I’m not saying they’re bad or lesser. I’m just saying that they’re not my book of choice. So how is it possible that I wrote a romance novel?

After a bit of soul-searching, I went out to the Romance Writers of America [RWA] web site, and read up on what makes a novel a romance.

For a novel to be considered a romance, there are two requirements. There must be:

This means that the main plot involves two individuals falling in love and struggling to make the relationship work.  I went back and asked my friends, and they indicated that, in their opinion, the relationship between Maggie and JD is the main plot. For me the romance drives the plot, but I feel like the plot centers on her self acceptance and that JD is the transport mechanism, the primary person who helps make it happen. Everyone else sees the self acceptance as a nice side effect of working out the relationship.

2) An Emotionally Satisfying and Optimistic Ending

Okay. An Untold Want does fit that requirement. It almost didn’t, but — and maybe this is the point where I went off the Women’s Fiction rails and headed down the Romance track — I wanted to tie it up nicely. I wanted Maggie to be happy, to have that optimistic ending. After such as struggle, I wanted her to find the place where she belongs, where she feels safe and comfortable. Maybe it was wishful thinking on my part, that if I can’t have it at least she can. I wanted Maggie to be different, to be not me. To end up better off than I did.

I’m sure that I’ll force myself through some flaming mental hoops before it happens, but I’m positive that sometime in the not too distant future, I’ll be changing the genre on An Untold Want. It’s not a difficult process, at least not technically. And a move like this will potentially open my writing up to a whole new group of readers.

But first, I need to convince myself that I wrote a romance novel.